Arrangement of Chinese and English Articles：陈小南

It is a good way to temporarily shut down the distracting world around us when we go to an outdoor concert to enjoy the fresh open air atmosphere, the beautiful music and the beautiful scenery generated by the performers on stage. While listening to Chinese traditional music, we might be able not only to glance over the artful ancient musical instruments, but also to appreciate its ancient sounds, rhythm and melody which would surely inspire our imagination, perhaps taking you to an ancient landscape scene where a nightingale sings in the bright moonlight and the shadows of dancing trees swing in the breeze.  Or perhaps a more heroic epic place in mythology where handsome immortals leisurely rest in the glorious palace gardens of fairyland with colorful artistic clouds floating away... It is definitely an interesting prospect of inspiration that people probably experienced in this wonderful performance.

On April 13th, Poly Hele Education and Wuhan Conservatory co-organized this special concert. Hele Chinese Orchestra and Chinese Chamber Ensembles performed a beautiful program named “Chutian Huayun”(Chinese Music in Southern Sky), where people shared a beautiful day together, made friends and expressed their feelings through music and its ancient tradition. This performance emphasized the beauty of Chinese traditional music and helped to promote the essence of thousands of years of history.

In this concert, the professional Chinese traditional orchestra from Wuhan Conservatory performed the usual  Chinese classics, presenting different musical styles which are mostly based on landscapes, plays, animals and mythology.  The music at times was fast and hilarious, smooth and quiet, wild like a horse, like a furious snake dancing, dignified, majestic and other beautiful passionate and dramatic feelings which were expressed in several musical forms and different instrumental ensembles. The little dancers from Poly Hele International Art Center have danced gorgeously with some of the music and showed the purity and genuineness of the children performing. And it was easy to tell from their natural and graceful movements that they have laid a solid foundation of traditional dance after years of being devoted to this art.

PolyHele Chinese Orchestra, co-founded by PolyHele Education and Wuhan Conservatory, is committed to public welfare and its Chinese traditional arts education, by exploring an innovative path for the development of Chinese instrument ensembles on the basis of traditional Chinese musical culture. In this concert, excellent performers from Wuhan Conservatory have brought us a wonderful and memorable performance once again.

With the enthusiastic, smooth and bright rhythms and melodies, and the powerful and energetic sounds of drums, the festive atmosphere of the outdoor festival flowed from the musicians  to their instruments to let their ancient music sing once more to render the entire venue and all audience as one. “The towering steep mountains were surrounded by the blue sea while clouds floated freely among them...The water spring streamed down on the ancient rock drop by drop and in the sequestered valley where birds can clearly be heard singing... People always desiring the luxury clothes and life style of royalty in old age, enjoying the natural outdoor peaceful atmosphere,  the fragrant grass and a Mi-lu deer near by with no worry.” Like this ancient poem, traditional music also gives us a window into that essence as if we were people from that ancient time once the music starts.  The audience felt like a cloud traveling around big mountains and admiring the magnificent view of the outdoor nature around. Everything is natural, fresh, simple, genuine and interesting. 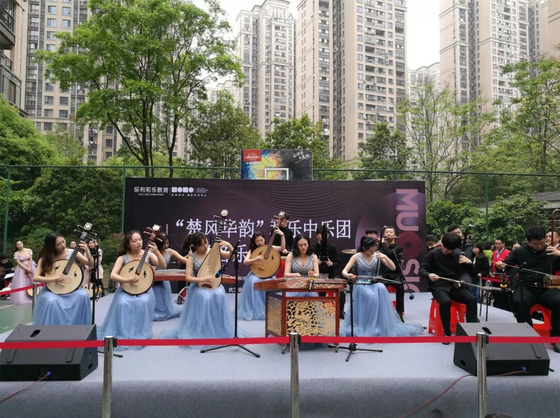 A ritual activity was brought to the audience in which the people participated gathering together to sing and dance, and enjoyed the drink after the devout worship ceremony similar to what it has been traditionally. The audience was so driven and excited by the music's wildness and mystery as this joyful celebration was gradually revealed. 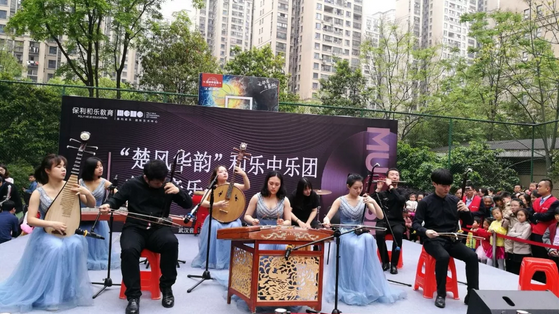 Erhu is charming because of its mellow and unique sound. The lyrical melody and the special tones when the strings were clicked captured the audience’s attention at once. "The one who is leaving feels most strongly what autumn brings. With one cup of wine, he is immersed in the countless emotions..." The singer sung with his accompanist the song  "How sad it is to be apart" The song was interpreted like a poem with the chemistry between the singer and the accompanist who communicated the concerns in mind through the music with each other. The Poly Hele International Arts Center aims to build a world-class faculty team for children, creating a brand-new art education system, highlighting the education with the sense of achievement, provide a one-stop education service system and a large number of on-stage opportunities. This time, the dance students performed on stage and showed the audience a few lovely dances.

It is a hygienic habit to brush the teeth for every day. Our little kids practiced it with an interesting piece of dance this time. How to be a good kid? Let the Babies show you with their dance. Chen Hui: She graduated from Huazhong Normal University with a bachelor's degree in music and dance performance, majoring in Chinese classical dance, national folk dance, modern dance and choreography. She has served as a special executive director of dance for many times and participated in the performance "Fenghua Zheng Mao"(Bloom of Youth) which was nominated for the Excellence Award of the 5th College Student Art Festival(Provincial).

What is the mystery of a kid's little body? Kid's will understand once their dance begins. Mum: Never mind, sweetheart. What matters is that you have fun. 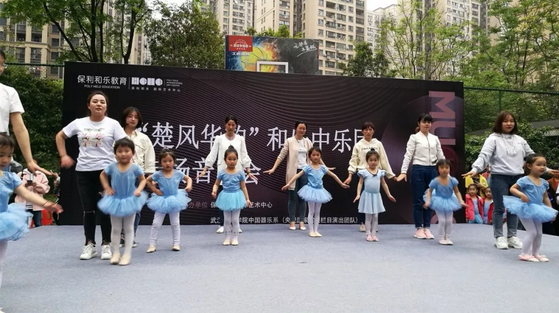 Performance: A Kitten in Happy Planet

Let’s become a kitten and have a happy tour in another planet! 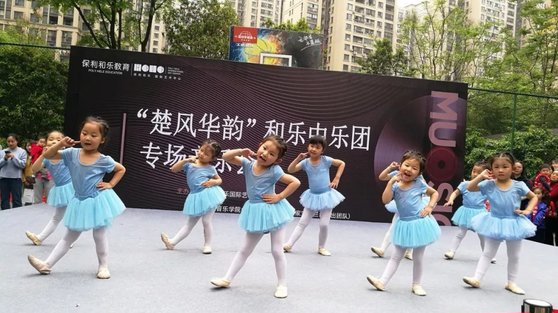 Wang Wei: She has a Masters of Dance Performance and Education from Wuhan Conservatory. She also was employed as a dance teacher at the Wuhan Conservatory during 2010-2016. Her work "Gui Jue"(Determination of Return) was shortlisted for the Final Evaluation Exhibition of Classical Dance of the 11th Chinese Dance "Lotus Award". The little dancers performed three dances successively, presenting the different amusements since both human beings and animals are same as the living creatures of nature as they vary in different features.

At such a great moment,

The most beautiful day in April,

Experience the fascination of traditional culture,

Gain the confidence to express yourself bravely,

Harvest the achievement of hard work,

And cultivate the passion, love for art and beauty,

Strives for a bright future of every child!